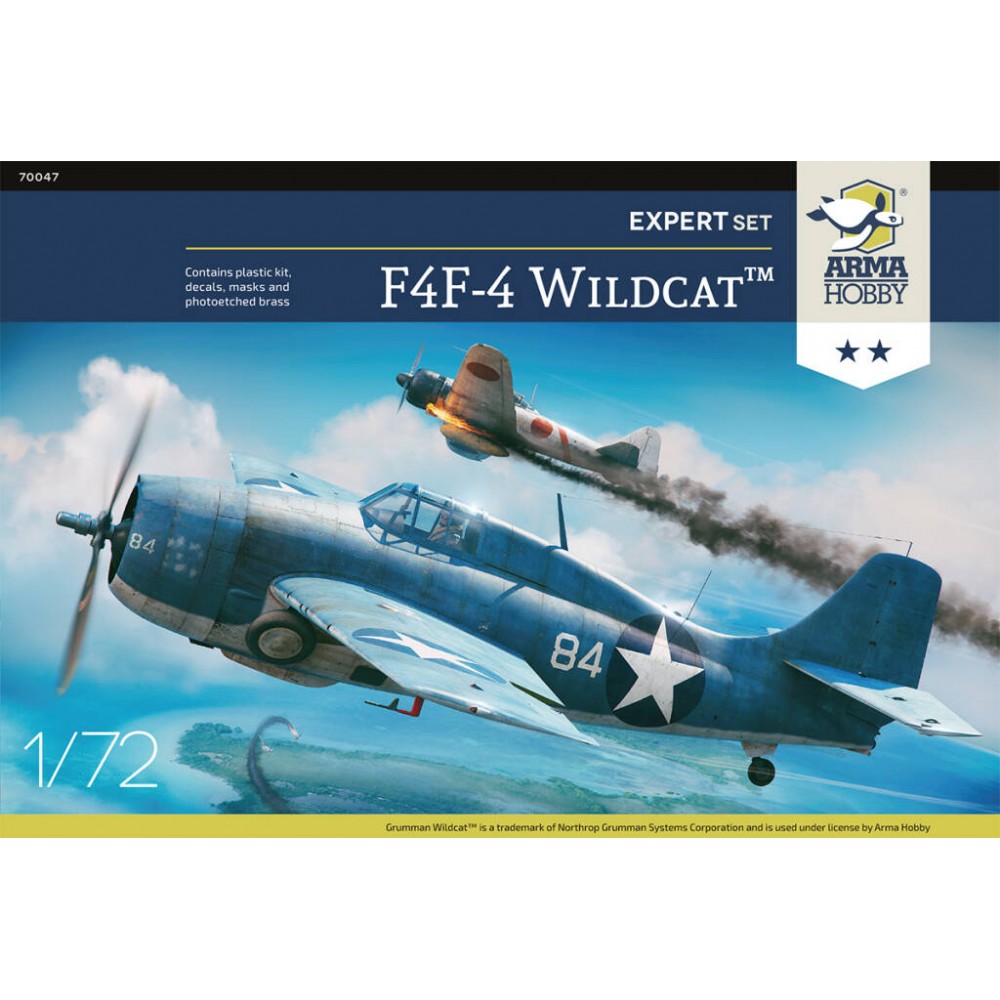 F4F Wildcat® is a registered trademark of Northrop Grumman Systems Corporation and is used under license by Arma Hobby .

The F4F-4 – the second version of the famous Wildcat naval fighter – entered into service in the first half-year of the Pacific War. Its predecessor, the F4F-3, had taken part in the initial fighting with the Japanese, proving itself effective in repelling attacks launched against American aircraft carrier groups by enemy land-based bombers. The F4F-3 had a drawback, though – its wings were fixed, and this limited the number of aircraft that could be stowed in a carrier hangar bay. In order to eliminate this drawback, Grumman’s engineers introduced a new version of the Wildcat with folding wings: the F4F-4. The aeroplane was fitted with an improved power unit (which forced a redesign of the engine cowling) and had two additional 12,7 mm machine guns in the wings, making for a total of six.

The first F4F-4s were embarked on aircraft carriers in the spring of 1942, only to arise mixed feelings. While carrier group commanders doubtless appreciated the increase in the number of fighters at their disposal, US Navy pilots were dissatisfied with the F4F-4’s increased weight and its modified armament. Due to the necessity of supplying ammunition to the additional weaponry, effective firing time was decreased by approximately 1/3. Thus, during an attack on a group of Japanese bombers, the shortened burst length would frequently translate into smaller enemy losses.  Another source of difficulty were the Wildcat’s inferior handling characteristics in comparison with its main opponent, the A6M2 Zero fighter.

The problem of combating the Zero was solved by the introduction of a new tactic known as the “Thach Weave” (named after the commander of VF-3 squadron from USS Yorktown). This proved particularly successful during the Battle of Midway, when on 4 June 1942 six F4F-4s from VF-3 tied down 15–20 Zeroes while providing escort cover for torpedo bombers from VT-3 squadron. Six enemy aircraft were shot down for the loss of a single Wildcat.

In August 1942, following the victory at Midway, the focus of fighting shifted towards the Solomon Islands, north-east of Australia, where the defence of the airfield on the island of Guadalcanal gained crucial strategic importance. For many months, the US Marines fighter squadrons stationed there repulsed massed Japanese aerial attacks. Pilots learned to make full use of the F4F-4 Wildcat’s main advantages – its reliable design and daunting firepower. Operating from the “unsinkable” land base and informed in advance of the enemy’s approach, the fighters were able to effectively drive back the waves of Japanese bombers. Intense dogfighting with the enemy disclosed some of the Zero’s weaknesses, chief among them the lack of armour protection, which caused the aeroplane to catch fire relatively easily when hit. The Wildcat on the other hand was much more rugged. During the exhausting battles over the Solomons, which lasted nearly one year, the Japanese lost the elite of their naval aircrews. Many US Marines pilots achieved ace status; for example, Capt. Joseph Foss shot down 26 enemy aeroplanes over Guadalcanal, the majority of them Zeroes.