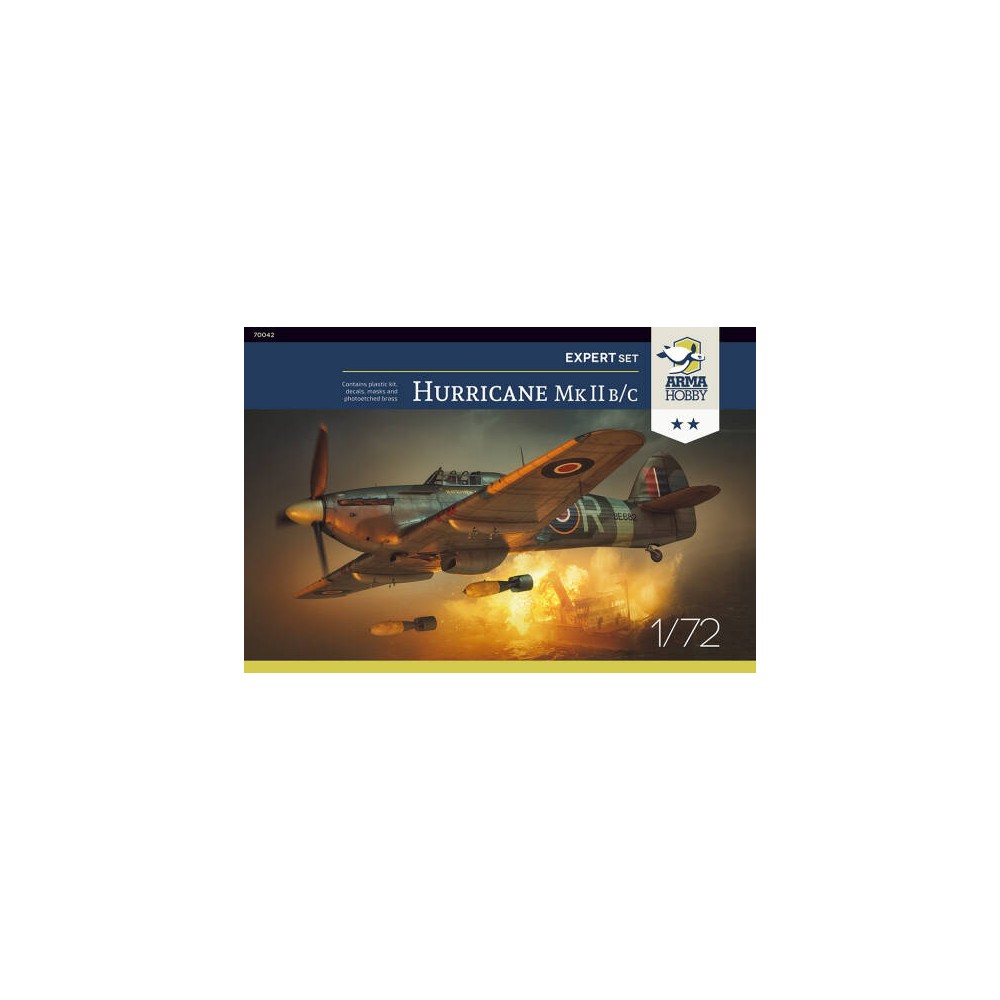 Set also contains new, clear parts sprue (thinner canopy). It is a new tool made after previous one broken.

Model is prepared for release on 28th Septmeber 2020, some features may change before release.

Hawker Hurricane Mk.II is a developed version of the famous Sydney Camm fighter aeroplane. It was created by building in a standard Mk.I airframe the Rolls - Royce Merlin XX engine equipped with a two-stage compressor. It has significantly improved the aircraft's performance — the new version marked as Hurricane Mk. IIa was flown on June 11, 1940. And already in August this year, the first aeroplanes went to the armament of RAF squadrons.

At that time, Hawker researched to improve the armament. These studies involved the use of cannons in various configurations. The first change was the installation of 12 machine guns 7.69 mm in wings. It was produced as Hurricane Mk. IIb. But the results were unsatisfactory, mainly because of small calibre of guns. The aeroplane was widely used as a fighter-bomber and known as "Hurribomber". One wing machine gun was usually removed in units to accommodate wing bomb rack in those aeroplanes.

The use of the Merlin XX engine enabled the installation of four 20mm British Hispano cannons. This variant, designated as Hurricane Mk. IIc, proved to be the most-produced version of this fighter. In total, 4,711 copies were created together with the machines rebuilt from A and B variants. The purpose of the aircraft has also changed. It was no longer a classic fighter aircraft, but mainly a fighter-attack plane. These aircraft were used to attack ground targets with cannon fire. Mk. IIc was also successfully used as a night fighter. The tactic of their use was to fight the Luftwaffe night bombers ambushing them near the bases they returned to after completing the task. Aeroplanes used in "Night Intruder" missions were fitted with underwing fuel tanks.

By installing a tropical filter, the "Trop" version was designed for operations in hot climates. Planes equipped in this way took part in the fighting in the Mid East and the Far East.

Hurricanes IIa/b were used in combat in Polish squadrons in the UK before refitting with Spitfires. Fighter Reconnaissance squadrons used them for training 309 (IIc) and 318 (IIb/c ).